underbares
Hailed by VOGUE as the most comfortable bra you will ever wear. 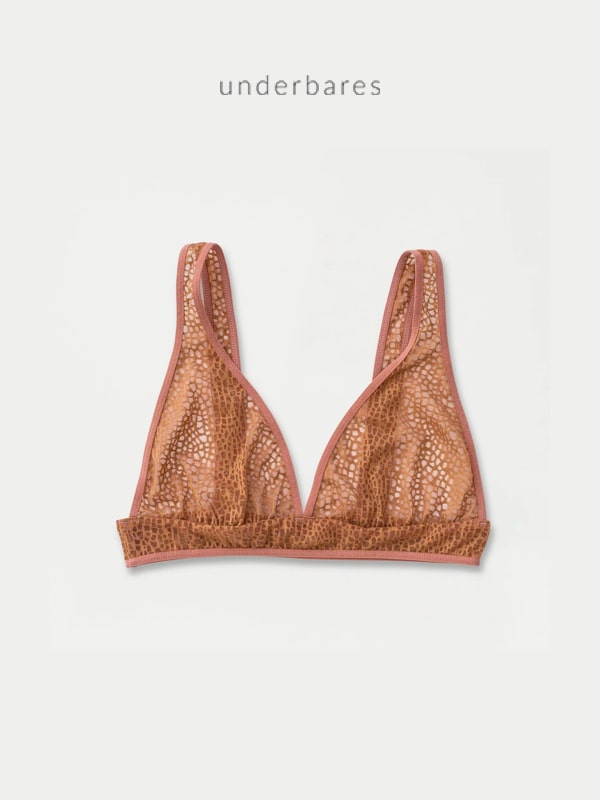 Genevieve Gralton’s aim with introducing Underbares is to build a middle ground between functional “nude” bras (“that are not in fact nude for the most part,” she notes) and hyper-sexualized, lacy push-up bras.

The Underbares bra is really about honoring a woman’s natural shape, and is designed using only stretch lace and stretch elastic. She didn’t want any unnecessary frills and it felt natural to strip down the design to the absolute bare minimum. It’s not about anyone else’s gaze,” Gralton adds. “Wearing these bras is about you and what makes you feel comfortable and beautiful.” In the dressing room, at the office, and everywhere in between.

Somewhere between the sexed-up Victoria’s Secret Angels lingerie and the nondescript beige bras of department stores, Genevieve Gralton knew she could find a bra to wear work that was both cute and comfortable. Except she couldn’t.

The 27-year-old professional from Massachusetts began her career out of college in Brand Marketing at Merrill Lynch in New York, where the environment was formal and she dressed to suit her career, not her personal taste. Her work wardrobe was a fact-of-life.

But she didn’t expect to be limited in her underwear selection, too. Something about putting on a drab bra underneath an outfit that already felt like corporate dress-up was especially depressing. The lace bras she saw splashed across billboards and lounging seductively throughout her Instagram feed didn’t give her enough coverage, or were inappropriate for work. And even the bras that were supposed to be practical felt like a design afterthought.

“The hooks would dig into my back when I leaned into my office chair, straps would slip down when I was talking to co-workers, and the ‘nude’ shades just never matched,” she explains. “The lingerie market is such a landscape of extremes. I was looking for something to bridge that gap between comfy and sexy.”

So Gralton did what any business-minded self-starter would do. She launched her own collection, Underbares, a line of bras (and soon-to-be-realized underwear) designed to be both feminine and pretty, but also wearable, that is designed in DC and made in the US. The range launched online in March 2018 and has been gaining visibility through pop-ups throughout the city. And while Gralton isn’t the first to recognize that there is a major gap in the women’s intimates market, she is DC’s very own ambassador within a growing trend of female CEOs who have been taking the matter to task.

Gralton used a 2016 transition down to Washington DC to work for Metropolitan Hospitality Group as the impetus to start moving on the project. Lacking a background in design, she began cold calling manufacturers up and down the East Coast to help her produce a prototype.

Some estimated 30-40 prototypes later, Gralton had her first model, a basic bra in two different colors, black and white, at a price point she went through numerous producers to attain: $44. The shape and material play to the popularity of bralettes with their minimal padding and lace materials. An amazing brand was born.